Triptychs and Drawings of Surface

The corpus of works entitled “Triptychs and Drawings of Surface” is a series of drawings, sculptures and lino­cuts, which propose a glance on surfaces that we do not see any more, because we have grown used to their familiar presence. We recognize graphic marks, which attract our attention by their beauty but also their ambiguity. 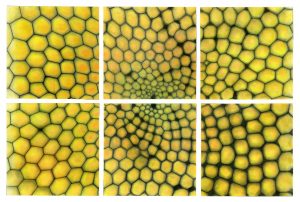 The “Triptychs” draw hybrid links between sculptural objects and drawn surfaces. This need to recognize and identify the origin is inherent to the human mind, previous to any experience, and draws straight from its atavistic memory. By occupying the space, the work proposes a relationship between the energy of the body and the internal dynamism of its memory. It creates a passage between real-concrete space, and internal space. 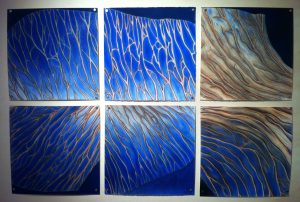 “Drawings of Surface” are composed of three groups of six drawings each. These fragments are preliminary studies of the drawings that were developed in the «Triptychs»: installations involving two drawings and a sculpture. They are investigation into a medium, a pat­tern, and how a specific rhythm can develop into a graphic surface. 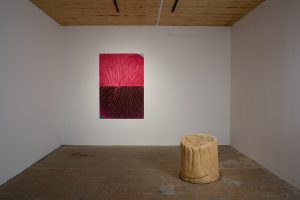 “PETALS-FOSSIL” consists of a sculpted and engraved pine stump. Its slightly tilted upper plane recalls a fossilized leaf. This plant fragment results in the hybrid­ization between the leaf of a poplar tree and the petal of a rose. On the wall, a drawn petal is chromatically modified. This group proposes associations of consti­tutive structures and tissues of surface, in an effort to symbolize the passage of time and its cycles, as well as the renewal of life. 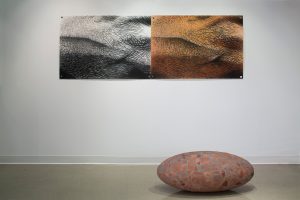 “SKINS-ELLIPSE” puts in context two drawings which present similarities with the mosaic sculpture that ac­companies them. This section of the back of my hand reveals the skin’s constitutive tissue, its uneven surface. Some formal resemblances appear where we can see an aerial view of a sand dune or earth cracked by drought. “THE ELLIPSE” on the ground presents us with an archaic shape which could resemble a sea pebble rounded by friction. This triptych invokes the wear of time and its action on material fragility. 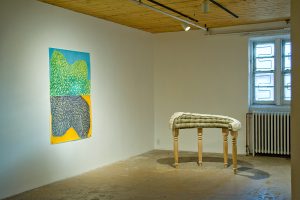 “PENTAGON-RÉCAMIER”
On the wall, a wild flower formed of five petals consti­tutes a pentagonal structure. In front of it, on the floor, a fragment of pine cone inspires a sculpture and its internal curve, which is covered with silk brocade, evokes a “Récamier”. Its legs of wild cherry give it an elevation and lightness. The different parts of the “Récamier” fit each other and form an ensemble. We rec­ognize elements usually associated with furniture, but the anthropomorphic quality of the carved pine cone and the fragility of the fabric seem to put it in peril. It is as if Metempsy-chosis had taken place; the passage of a soul in another body left tracks of its migration. 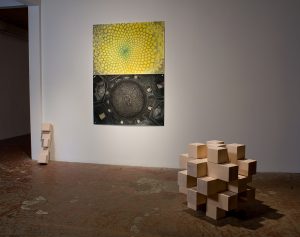 “ASTER/DÔME-PATIENCE”
A first drawing presents an architectural dome, which holds together thanks to its last element: the keystone. A second drawing captures the central part of an Aster. Both have the same Vortex structure comprised of small tight fragments interlocked with one another. The sculpture titled “Patience” is a cubic volume formed by 14 identical beams of wood held together by pin mor­tise. This assembly technique relies, as does the dome, on the construction by gravitational stacking. This com­position evokes the weight of material and its pre­carious balance. 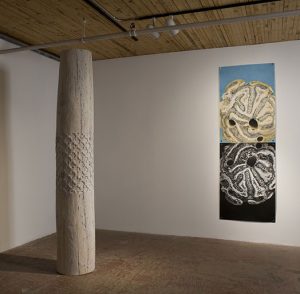 “CORAL-BEAM”
In its symbolic meaning, the beam supports the earth and the sky. It connects them. It combines the mascu­line and the feminine. It is the axis of the world. In Voodoo religion, it is a direct link with the beyond. This pine trunk sculpted with a star motif recalls the con­ception of the nocturnal vault. On the wall, an enlarged view of a coral suggests the porosity of bones. It recalls the bottom of the sea, water, limestone and salt. The verticality of the group evokes a passage, a tran­sition. 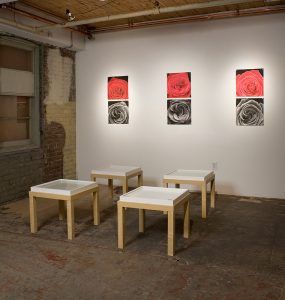 “ROSAE [ELENA]”, “ROSAS [LILY]”, “ROSIS [ROSELLE]”
The drawing of these petals expresses a notion of the center where everything converges. It is the pole where everything begins and ends. For every diptych, the movement of the whirlpool leads in the first towards the left, whereas in the second, its directional movement leads towards the right, creating a mirror effect. The monochromatic version of the drawing increases the sculptural qualities of the petals, stressing their vol­umes. 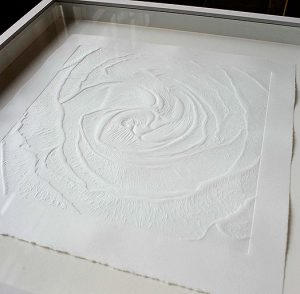 “THE LEFT AND THE RIGHT”
The installation of this work includes frames and sup­porting tables. It proposes a series of two engravings embossed without ink. While “THE RIGHT” translates in low relief the space of the diptych “ROSAS”, “THE LEFT” presents its opposite. Where a volume moves forward in the first one, it recedes in the second one, stressing the passage from solid to hollow. These two embossed linocuts scar the paper surface with characteristics typically found in sculptural language. On the surface of the paper, which is usually smooth, modulations are perceived, which imprint the material with a volumetric memory. 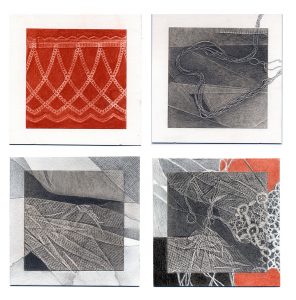 “FABRICS”
This series started while working on the engravings of “THE LEFT AND THE RIGHT”. It finds its inspiration from Francesca’s mother workshop, when, as a young girl, she collected, threads, ribbons, laces and scraps of fabrics for their construction quality and their patterns. An etching press was used to print these fragments into the dampened paper, recording the memory of these various materials. Once the paper was dried and pressed, the surfaces were enhanced with chalk and graphite. The neutral zone left around the frame edge, outside the printed area, allowed an overflowing of the embossed materials and offered a neutral surface where the artist could introduce graphic elements in trompe-l’oeil. 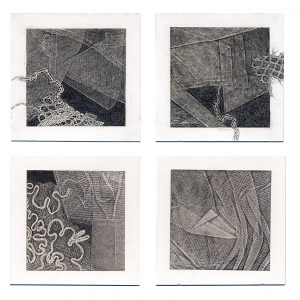 This omnipresence of the fabrics’ web and fiber is found in several of her sculptures, where the surfaces are marked with a flexible web, wrapping the modeled shapes. Therefore, with the “FABRICS” series, the buckle is closed: The sculptural dimension of the em­bossed paper meets the graphic dimension of the sculp­tural work.