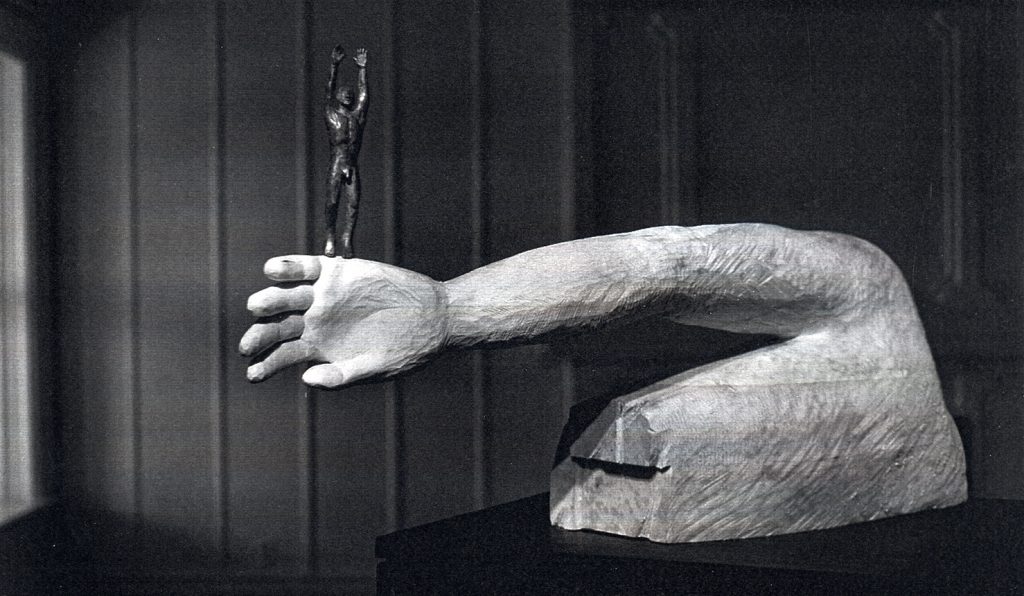 The presence of light can only be perceived in its captive state. Light without surfaces to flood moves past our consciousness and our desires. Yet in its interaction our perception, which exists in time and movement, swings between conventions and illusions of reality. How light affects the totality of our physical body is still not well understood. The body as an extended organism is situated in a perceptual and psychological field, which constitutes a series of very complex and variable light sensitive surfaces.

Sculpture in its primary relationship to matter and in its greater complexity to the body navigates material surfaces both as entrance and exist to the psychological social and imaginary space from which it is always constructing its perceptions of itself in the world. Francesca Penserini initiates her sculptural inquiry through the dimensions of light and surface.

In 1985, Penserini produced a group of drawings that represented a freestanding curved wall as arcade of five arches. In this fiction all the shadows of the architecture join together at a central point pulling the pictorial space of the drawing into a curved illusory sur­face. In these drawings there is a very subtle discre­pancy between the pictorial expectation of the image and the pictorial reality she constructs.

The conventional perspectival grammar of light and form is the subject of the installation in Villa Schifanoia in Italy The Green Pool 1985. This work, in spirit, is not totally unlike Jonathan Borofsky’s visual distortions of direct or projected drawings on the architectural sur­faces. Penserini in this installation, stays within the subject of architecture and initiates her entry into the psychological and mythical space of narrative dreams that are central to Borofsky’s work.

Penserini concentrates on an illusory sensation of space with painted Gothic black window shapes that are rece­ding in perspective as though existing on a curved sur­face. The rectilinear room supporting these dark shapes creates the impression of darkness outside, setting up an internalized space. The ceiling as surface continues the spatial distortion with a floating grid structure that has been coated with fluorescent paint to trap the light projecting from the pool of greenish fluorescent light on the floor. This warped and suspended structure further makes it difficult for the viewer to locate their precise position in an otherwise Cartesian space. The Green Pool creates a disorientation that is psychologically charged.

The function of the fluorescent light in this piece is like and unlike Bruce Nauman’s Green Light Corridor which was conceptually an exploitation of the nature of fluo­rescent light as a calculated disorientation, a mecha­nism of control of socialized and politicized space. Francesca Penserini, however, does not address social­ized power and control, she draws the observer as subject into her play of perception and sensation with the paradoxical theatricality of green fluorescent light. The observer’s interior subjective psychological sensory dimension as poetics is illuminated.

The internal and external dichotomy between the conditioned space and its internal equivalent is further clarified with the human-scale vertical Gothic sarcopha­gus shapes entitled Fiume Foglia 1987. These shrouded spaces have inscribed on their interior in fluorescent pastels a life size configuration of a human body. These human-scale dark hollowed shapes surround in a semi­circle a whirlpool Tourbillon 1987 that has been modeled in clay, cast in epoxy and treated with a very painterly patina of varying gradations of white to blue.

The bodies of the Fiume Foglia 1987 have come through a window that ceases to be flat and folds itself like a cocoon around space, the birthing of the body as both material and psychological identity.

In this work, the whirlpool Tourbillon reads as both attracting and repelling, simultaneously drawing the body out of the cocoon with its centric pull or inversely delivering the body into the container of the “window” on the crest of a wave. This thematic of birth and death with water as the primordial shaper of continuity as matter in motion is the acting out of a classical drama that tempts the metaphors of Gesamt-Natur (all inclu­sive), a recurring thematic in Penserini’s work.

The next installation shown at the Clara Maria Sels Gallery in Düsseldorf in 1991 more specifically con­ceptualizes the relationship between the nature of the material constituencies and the body. In La Vague, Le Cone and La Sphère of 1991 each element is separated clearly from mutual poetic and psychological asso­ciations, contemplating a more formally considered relationship linked to the conceptual body recreated by the observer.

La Vague, a painterly treated fiberglass wave, is a sculptural gesture of human scale. It rests on a simple pyramidal scaffolding, table height, supported simply on three points. The action of the wave can be seen as moving away or towards the torso of the viewer.

Le Cone rests on a steel base that consists of a dia­gonally upwards-crossing lattice that simultaneously configures into diamonds or squares, supported by ascending rings, a re-presentation of the Cartesian grid as an ascending form. The upper one third of the cone’s apex becomes what looks like an organic, twisted, pointed, frozen cone whose sculpted and cast surface is visually reminiscent of Beuys’ cones of fat. However, the epoxy cast cone addresses concepts of the illusory theatricality and entropy in its ascending material hierarchy of continuity and structural possi­bilities.

The third element, La Sphère, a softly modulated grid of 16 points or intersections, is positioned on the floor as the most grounded of the three sculptural fragments. Within its confine sits a ball or sphere that is also put into imaginary rotation by the curved grid, a carto­graphic location device to position the sphere.

The triptych of wave, cone and sphere draw our attention also to the material potential of movement, direction and position by which we navigate the extended physical and psychological body. Navigation only becomes possible by the conceptual dichotomy of the ordering of material chaos. It is for this reason that each sculptural form has been given an analytical support of grid or compass ordering location devices giving a strong rational and conceptual dimension to this work.

Direction, movement and position have an almost syn­aptic relationship in the Lame de Fonds 1992. A large epoxy cast wave appears to be shooting directly out of the ground in a vertical crescendo while just a few feet away lies a small Cartesian basket that contains a brightly burnished clay sphere whose form looks as though shaped by the turbulence of water within the basket’s circularity.

This relatively small dynamic event connects with the verticality of the wave and appears to be harnessing its energy by the imaginary retrieval of the wave in the imagined suction of the miniature whirlpool. Here the circle has narrowed from the evocation of energy released to energy re-harnessed. With this work Penserini has articulated the condition of the observer not only to the event of nature and self but also of the relationship of life to art as invention and reconstruction.

In her most recent works of 1995, which can be read as separate works but also as interrelated narrative, she sets up a relationship between the imagined self, the projected self and the self as presence.

A human scale wooden shoulder, arm and hand frag­ment supported by a tall rectilinear table has a small bronze figure standing on the hand as though to leap into the gigantic river fragment below. In this theater of life and destiny, the observer participates by empathy with the small figure, which leaps from the fragment of a projected self. Desire leaps from the fragmented self or moment and completes itself in destiny.

With the treatment of the body fragment, one becomes aware of progressively refined techniques of execution. The laminated shoulder is roughly chainsawed, the arm looks like it has been carved with a finer chisel and the fingertip is smoothly sanded. This progression from brutal attack on the wooden surface to the highly invisible trace of material conversion is also a measure, but even more so a mark, of the disappearance and dissolution of the human trace and body present. What is left to the hand is the reconstruction of the action of will as expression of an internal dynamic action.

The second work of this installation, The Seamstress’ Thread, is a slightly larger than life-size female torso not unlike Aristide Mailloil’s The Monument to Blanqui but without the classical fragmentary associations. This Torso, although only physically present through the observer, was earlier addressed by the approaching wave in the sculptural piece La Vague of 1991.

The vertically layered and laminated body fragment sits in proper proportional height on a large squared wire mesh spiral whose filigree thread-like structure creates the illusion of a solid mass suspended in air. Here the repetition of spiraled circularity of the wire mesh cre­ates a kind of intensely dynamic moving field below the body on which it appears to be hovering. The otherwise solidly, proportionally chiseled torso undergoes a mate­rial energizing through this dynamic action that also moves through its mass due to the subtle dynamic formalities of the torso whose upward gesture continues the flow beyond its material presence.

In proximity, a small crocheted basket of a continuous metal thread lies on the floor. This vessel, which holds, conducts and grounds energy, is positioned as con­tinuity to the suspended torso. Although this gesture is a recall of the little basket with sphere from the 1992 piece Lame de Fonds, this container is empty insofar as we, the spectator, place our desires, impossible as they might be, into its threads of continuity. The personal as well as ” the social body sews itself up around its own incarnation of its own impossibility…. whence the compulsion to orderliness.” (1) 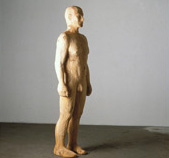 Facing away from the Torso is a third sculptural ele­ment, that of a male body, Un des deux frères, life size, which stands in a relaxed tree like pose rooted to the ground. This solidly slightly larger than life figure is roughly hewn with a chainsaw tool, leaving marks on its body that are evidence of process giving the impression of a gestural drawing that traces and covers all its surfaces. The face, with a determined fixed gaze, projects ahead, creating a kind of visual corridor or tunnel whose light as paradox is blocked or projected like a guide by its presence.

It is difficult at this early date in the new work to determine whether we are dealing with gender identity. With Francesca Penserini’s work we, are left with an inescapable knowledge; harnessing energy, whether conceptual or real, narrative or cognitive, is subject to material conversion whose trace is the evidence by which we re-create and bind our bodies to the world.